The Regions 2030 statement outlines the government’s vision for regional Australia and the key initiatives helping to achieve that vision.

“Regional development is about having a vision for what we want regional communities to look like in 20 years. It’s about making sure we create both careers and jobs in our communities so our children and grandchildren can lead fulfilling lives. It’s about developing ways our young people can receive an excellent education without leaving the community they grew up in.

“It’s about building the kinds of communities our children and grandchildren either want to stay in or come back to.

“Regional development is about much more than just grants programs.

“Regional Australia provides the water city people drink, the milk on their breakfast, the meat and vegetables for dinner, the gas to cook dinner and heat water, and the electricity which powers their households.

“Investing in our regions is essential for Australia – strong regions mean a strong nation.

“A ‘one-size-fits-all’ approach to developing regional policy does not work. Regions 2030 focuses on working with communities to meet their economic and social needs, which will help to improve life for rural, regional and remote Australians.”

This commitment is being delivered through investment and activity across five focus areas across Government: 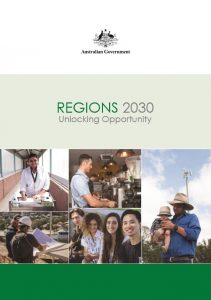 “Regions 2030 and the Regional Australia Ministerial Taskforce, chaired by the Prime Minister, will continue to consider policies which take advantage of the opportunities available and tackle the challenges facing regional Australia,” Minister Nash said.

Minister Nash said the announcement follows the release of the 2017-18 Federal Budget last week reinforcing the Coalition Government’s commitment to unlock the potential of Australia’s regions, including measures such as:

The Coalition Government continues to think years ahead as it plans for regional Australia through initiatives including: